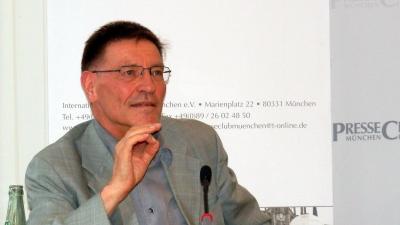 Born in Würzburg on 20 November 1944, I grew up in forester's lodges in Hain im Spessart, Waldaschaff and Lohr am Main together with my brother Karl-Friedrich, who was head of the Bavarian Forest National Park until 2011. I attended the Waldaschaff primary school, the Humanist grammar school in Aschaffenburg and the Humanist grammar school in Lohr am Main, where I graduated in 1963.

During my school years, I was a member and youth leader of the Protestant Boy Scouts (CPD) and founded the Protestant Trombone Choir Lohr with some friends.

After graduating from high school, I worked six months as an intern in the Frammersbach forestry district, which was a necessary prerequisite for studying forestry sciences. From 1964 to 1968 I studied forestry at the Ludwig-Maximilians University in Munich and at the Albert-Ludwigs-University in Freiburg im Breisgau. During my studies I did internships in Smaland in Sweden and Trabzon in Turkey. At that time, we traveled with a VW Beetle, tent, a lot of time and little money through Asia Minor. Since then, the fascination of the Orient has never let me go.
After graduating from the University of Munich with a degree in forestry, I worked as an apprentice lawyer in Schnaittenbach in the Upper Palatinate and at the former senior forester's offices in Munich and Würzburg. The Great Forest State Examination 1970 finished my training

After a short period as an agricultural officer in the CSU state leadership, I first became a personal adviser in 1970 - 1974, later became the office manager of the Bavarian Minister of Agriculture, Dr. Hans Eisenmann.

Afterwards, I went to the Bavarian State Representation in Bonn for four years as a representative of the Bavarian Ministry of Agriculture. I experienced there the stormy years in which Helmut Schmidt followed Willy Brandt as Chancellor.

From 1978 to 1986 I was head of the Bavarian forestry office in Gemünden am Main.

My focal points were: sustainable forest management, mixed forests with an emphasis on oak and beech, forest development with forest paths, nature conservation projects, the foundation of forest management associations, construction of cross-country trails, wood as an energy source.

In 1986 I was elected to the Bavarian Landtag as successor of Walter Zeißner in the administrative district Main-Spessart, to which I belonged until October 2013.