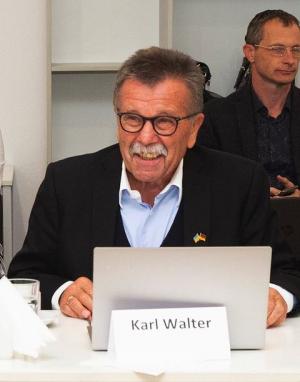 Karl Walter was a professional officer in the German Air Force for 30 years with staff and leadership duties in national and international assignments as well as studies at the "Canadian Leadership Academy for Higher Leadership" in Toronto. In 1993, Walter took early retirement to work in the private sector.

With ten years as a consultant in Ukraine for the Bavarian State Ministry of Labour and Social Affairs and the Bavarian Ministry of Economic Affairs and Transport, Walter took the lead in setting up the Bavarian House of Odessa (BHO) and the Ukrainian Bavarian Management Training Centre (UBMT GmbH) in Odessa, Ukraine from April 2000 onwards according to the principle of "helping people to help themselves". In a further ten years as a board member of the BHO and as the majority shareholder of the UBMT gGmbH, he consolidated the operation of the two institutions in self-management.

Today, the aim of the Charitable Fund (WTF BHO) is to support the building of a civil society. The centres of the House for Language, Meeting, Culture and Social Work fulfil the following tasks:

UBMT gGmbH supports the development of small and medium-sized enterprises in Ukraine, initiates cooperation between Ukrainian and Western European enterprises and offers services required for successful business management. The operational management of both institutions has been successfully carried out by Ukrainian management personnel since 2021.
Walter is the chairman of the "Förderkreis Bayerisches Haus Odessa e.V." foundation.

Deutsche Bank predicted rapid growth in 1991, the year of Ukraine's independence. However, despite favourable conditions, 25 years of independence led to political and economic stagnation. The process of privatisation led to a nomenklatura democracy and a nomenklatura market economy with a union of law, capital and political power. Corruption, inefficiency of public administration and barriers to trade. The lack of reforms and legal uncertainty prevented the development of existing potentials and reduced the benefits to a privileged few.

The country with 41 million citizens has good infrastructure, but is in need of renewal in all areas of life. With the 2014 presidential election and the election of the new parliament, Ukrainian voters consistently gave majorities only to the EU-oriented parties.

The presidential election on 01.04.2019 proves that even a President Poroshenko was too attached to the "old business traditions and customs" for the Ukrainian people. People see a politically completely inexperienced actor as the lesser evil.

"We want to live European values," Yuri Andrukhovich wrote in an open letter in connection with the uprisings that emerged in November 2013. This attitude seems to have become blanket thinking, especially among the younger generation.

With the entry into force of the EU Association Agreement between the EU and Ukraine on 01 January 2016, the above-mentioned obstacles were reduced through the imposed legal alignment and the internationalisation of laws and regulations: less corruption, more competition, fewer monopolies, free enterprise and positive distribution effects are the measurable consequences.

At the end of the Eastern Committee briefing on 15 December 2021, the Eastern Committee Regional Director Stefan Kägebein drew a positive conclusion: "Despite the enormous pressure from Russia and internal Ukrainian squabbles, for example over a new oligarchy law, Ukraine is in a relatively stable position according to the experts and is also making progress with reforms, at least in some areas. The reserves of the central bank are currently larger than they have been for a long time, and the Corona pandemic seems to have been mastered to some extent. Long outstanding feed-in tariffs for green electricity have largely been paid. And a first reference project with the participation of German partners for the purchase of hydrogen from western Ukraine is in the starting blocks. However, regulatory and financing issues for foreign investors urgently need to be solved. Then - the panellists agreed - Ukraine would be able to exploit its enormous potential for renewable energies."

Small and medium-sized enterprises, which had hardly any development opportunities in the past, lack "know-how, capital and distribution structures".

With the improved framework conditions, favourable production costs and human resources also have a dynamising effect on both the domestic market and export opportunities.
It is not subsidies that lead to success, but investments. Partnerships in the SME sector thus promise quick results for both Western partners and Ukrainian entrepreneurs, taking into account local peculiarities.

The economy focuses on agriculture/forestry/fisheries, mechanical engineering, logistics and energy efficiency. Furthermore, a very dynamic IT development is noticeable.

As an eastern border country of the EU economic area, Ukraine is expected to have further growth potential after security policy stabilisation, in addition to its growing domestic market, as a geostrategic bridgehead to the Far East.